Why The Great Philosophers Prized Self-Mastery Over Worldly Happiness 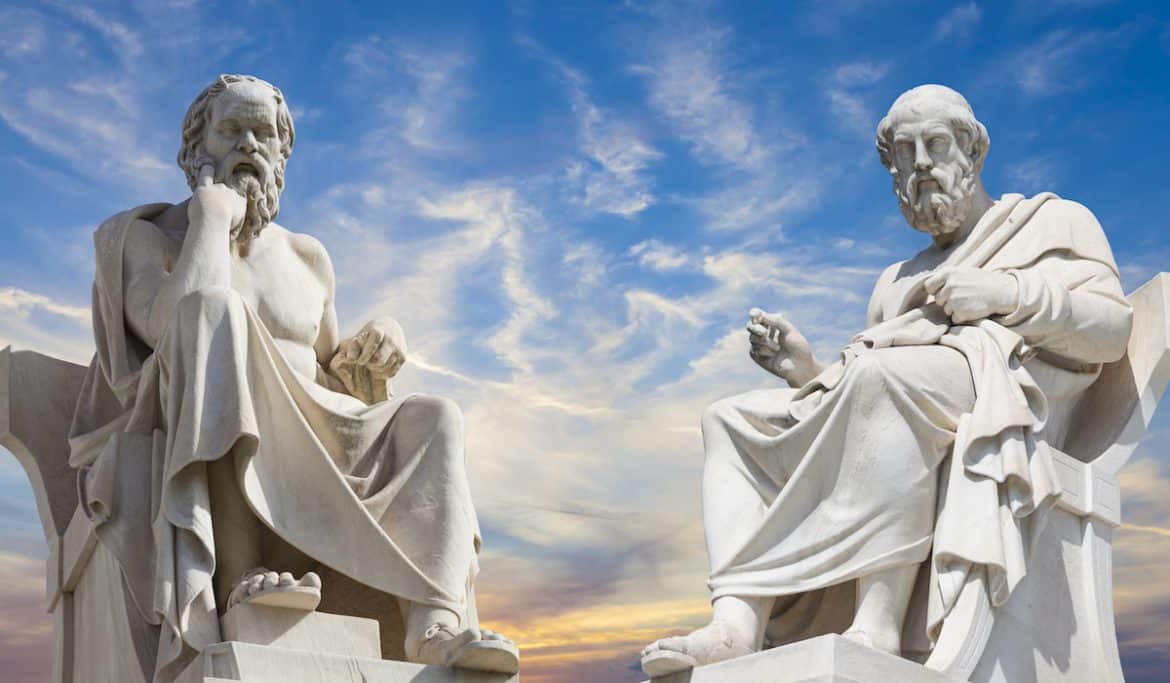 When considering the fact that most of history’s great philosophers, hailing from lands near and far, never prioritized sensual pleasures or material possessions, nor did they encourage others to approach life in this manner, we must wonder how the modern view of happiness became so misconstrued. Where as most of us eagerly run from one endeavor that brings a bit of fleeting joy to the next, the iconic minds of ancient times sought not happiness in the worldly sense, but rather the peace of mind that comes from mastering themselves. The great Hellenistic philosopher Zeno of Citium tells us why:

Man conquers the world by conquering himself.”

To attain the inner tranquility all humans desire at the core of their beings, the exalted sages knew that, rather than searching outside of themselves in things they don’t control, they must look inward while striving to live with understanding, wisdom and virtue. Similarly, if we so choose, each of us can nurture an enduring state of contented bliss by heeding the advice of the immortals who came before us.

The Unquenchable Thirst of Desire: Whether we explore the teachings of great ancient philosophers from Italy, China, Greece or India, it is easy to see how there’s nearly unanimous consent in regard to the problems that arise from living for the sole purpose of quenching our thirst for material acquisition, social glorification and bodily pleasure. The Roman Stoics, for example, knew that appeasing one’s desires will never result in lasting happiness so they taught that inner contentment should be valued over the temporary joy that’s brought about from the outside world. This is why the immortalized statesman Seneca proclaimed:

The greatest wealth is a poverty of desires.”

Instead of subjecting ourselves to a lifelong quest for riches and fame, the ancient Stoics told us that the only way to attain true life-satisfaction, which is what we’re really after, is through self-knowledge, acceptance, control and respect. It’s for this reason that the first step we must take to attain the wisdom-based tranquility we seek is to forget about worldly happiness all together and shift our focus to mastering ourselves as individuals. By striving to transform our habitual ways of thinking and behaviors, with guidance from the immortals’ teachings, while simultaneously celebrating the many blessings already present in our lives, it’s certain that we’ll be on our way to attaining the ultimate wealth of inner peace. The iconic Roman emperor Marcus Aurelius, who’s considered by many to be history’s most influential and important Stoic philosopher, reminds us:

Battling Against the Universe Unfailingly Ends in Defeat: Between the 6th-4th centuries BCE was monumental age for Chinese philosophy as iconic thinkers such as Confucius and Lao Tzu expounded a bountiful amount of life-affirming wisdom. Just as the Stoics knew external circumstances had no true bearing on individuals’ state of well-being, China’s most illustrious minds realized that one’s feelings of peace had little to do with the uncontrollable forces of the outside world. This understanding, of course, is the reason why they pointed to the limiting effects that come from struggling against the universe to create worldly happiness, in the form of riches, pleasure and success, and told us to instead focus on developing a harmonious state of contented acceptance, which isn’t affected by outer circumstances, within ourselves. The admired 4th century BCE philosopher Zhuangzi proclaimed:

Perfect happiness is the absence of striving for happiness.”

For us to cultivate an inner state of enduring tranquility like the greats of Chinese philosophy, it’ll be imperative for us to understand that battling with the universe for external pleasure and success unfailingly ends in defeat. Not only is this true because the greater forces of the cosmos aren’t under our control, but also because the abstract yin and yang principles of nature, which govern over all things, ensure a harmonious balance between health and sickness, prosperity and poverty, success and failure, and pleasure and pain. By coming to realize these truths, in addition to the fact that the momentary pleasures of worldly endeavors ultimate leave us discontentedly craving for more, we’ll be better able to allow things to take their natural course and cultivate harmony, peace and bliss within ourselves. Confucius so wisely told us:

First there must be order and harmony within your own mind. Then this order will spread to your family, then to the community, and finally to your entire kingdom. Only then can you have peace and harmony.”

Well-Being is Rooted in Virtue: There are few countries that can match the rich philosophical history of Greece as it’s believed to be the birthplace of western philosophy. While the many immortalized Greek philosophers didn’t see eye-to-eye on all intellectual subjects, nearly all of the country’s exalted thinkers similarly came to believe that personal well-being is rooted in virtue. It was around the same time as China’s monumental philosophy movement, during an era that’s famously become known as the Axial Age, when the great Greek philosophers Socrates, Plato and Aristotle began pondering life’s toughest questions and encouraging others to develop humility, kindness, tranquility and nobility within themselves. Of the blessings that come from virtuous qualities such as these, Socrates proclaimed:

Virtue does not come from wealth, but wealth and every other good thing which men have comes from virtue.”

Because the quality of our lives is greatly influenced by the beliefs we hold about ourselves, the only way to attain true peace of mind is by maximizing our virtuous potential. Undoubtedly, this is the reason why the many distinguished minds of Athens strove for continuous self-improvement, across the many dimensions of life, while simultaneously nurturing the goodness within their hearts. If we take a similar approach, soon enough we’ll discover that our view of the world at large and ourselves as individuals has change for the better, our precarious and sometime tumultuous internal state has transform into one of stoic resolve, and the blessings in our lives have handsomely multiplied. Aristotle told us:

Excellence is an art won by training and habituation. We do not act rightly because we have virtue or excellence, but we rather have those because we have acted rightly. We are what we repeatedly do. Excellence, then, is not an act but a habit.”

The Impurities of the Mind:

Although India is most recognized as the motherland of modern religion, the spiritually intoxicating country also has a rich philosophical history that dates back thousands of centuries. Of course when thinking about great Indian philosophers, more contemporary icons like Mahatma Gandhi, Rabindranath Tagore and Jiddu Krishnamurti quickly come to mind, but long before these men walked the earth, other intellectual sages such as Adi Shankara, The Buddha, Madvacharya and Kabir we’re expounding philosophical wisdom. While the country has given the world a treasure trove of life-affirming advice, perhaps no collection of teachings has been as important as the ones pertaining to mind. Or more specifically speaking, the supreme guidance that shows us how to cleanse the mind of impurities, and detach ourselves from the worldly illusions that prohibit inner peace, with the help of meditative practices. The prolific 8th century philosopher Adi Shankara told us:

As gold purified in a furnace loses its impurities and achieves its own true nature, the mind gets rid of the impurities of the attributes of delusion, attachment and purity through meditation and attains Reality.”

It is said that by committing ourselves to undertaking a meditation practice, we can systematically come to uncover what the Buddha discovered some 2,500 years ago. Although our inborn psychology tells us that satisfying sensual desires will bring us what we ultimately seek, the truth is that our craving for pleasurable experiences and aversion towards their negative counterparts, both of which are inevitable in life and impermanent in nature, is why we continue to suffer. To free ourselves from this egotistical illusion, that tells us creating a life of permanent joy in things outside of ourselves is possible, it’ll be imperative to master the mind. The Buddha told us doing so would prove to be life’s greatest blessing:

A mind unruffled by the vagaries of fortune, from sorrow freed, from defilements cleansed, from fear liberated — this is the greatest blessing.”

Striving For Self-Mastery Over Worldly Happiness: There’s good reason why the vast majority of great ancient philosophers, regardless of their respective cultures, have independently came to believe that life’s ultimate aim should be self-mastery, contentment and inner peace rather than worldly desires that bring about temporary feelings of pleasure and joy. As we’ve learned by exploring the lives and teachings of the exalted thinkers from Rome, China, Greece and India, to move ourselves towards this most important goal, we’ll have to devote all of our energies to both working to improve ourselves as individuals and striving to attain the experientially-based wisdom that comes from purposeful living. The great Stoic philosopher Epictetus points out the way:

Freedom and happiness come from understanding – and working with – our limits. Begin at once a program of self-mastery. Stick with your purpose. Do not seek external approval. Do not worry about anything outside of your control. The only things you command are your thoughts and actions. We choose our response. Stop aspiring to be anyone other than your own best self: for that does fall within your control.”

Using the Reality of Death to...

Thank you for this blog.