Diwali: The Hindu Festival of Lights 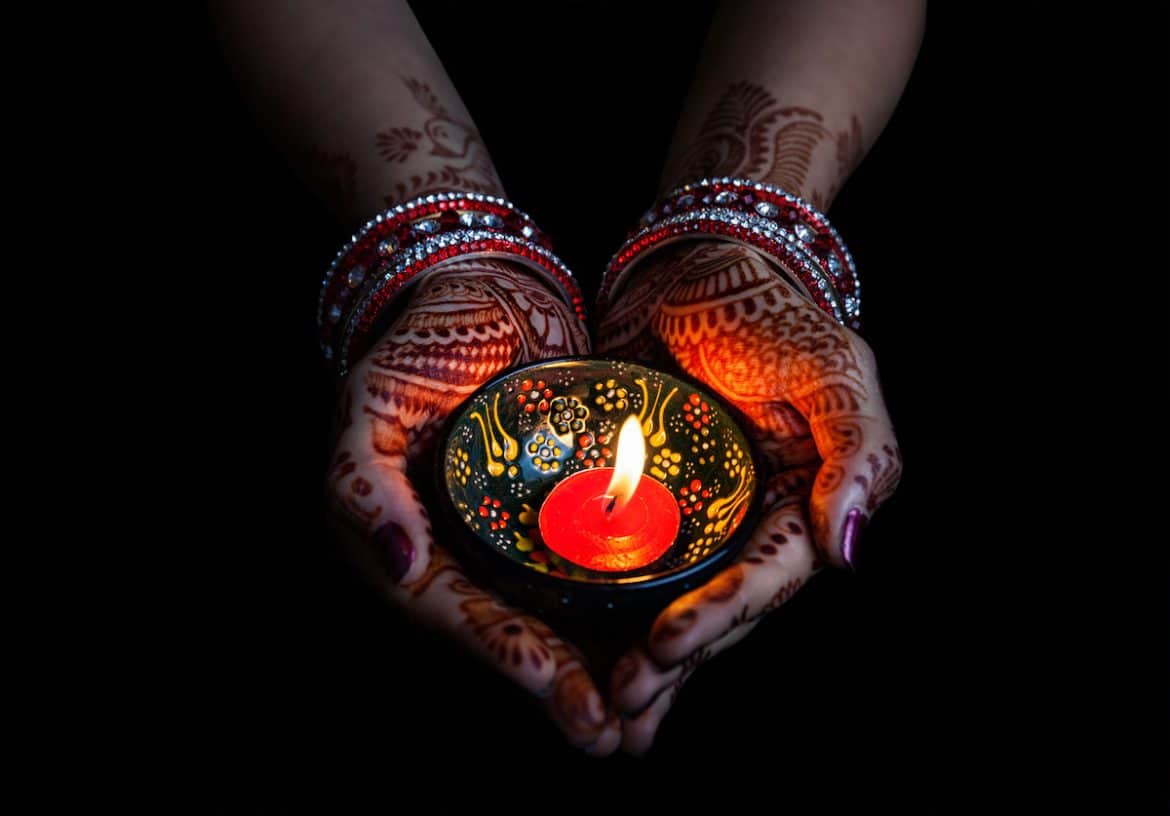 Every autumn in the India, just as the moon positions itself to create the darkest day of the year, Hindus partake in one of their religion’s most important festival traditions. The holiday of Diwali, which can translate to mean ‘a row of lights,’ is celebrated by millions across the subcontinent who are eager to honor the victory of good over evil, knowledge over ignorance, and light over darkness. The great Hindu sage Chandrasekhranda Saraswathi tells us that:

The significance of Deepavali [Diwali] is the removal of darkness and ignorance from the mind and filing it with goodness.”

In addition to being one of the most highly anticipated spiritual holidays, Diwali also serves the purpose of starting a new Hindu business year. Depending upon the Hindu calendar, Diwali festivities take place annually over a five day period in either October or November. This year, October 30th marks the date that millions of Hindus celebrate the 2016 Diwali by lighting up their country with lights, decorations, and fireworks. As the old Hindu adage goes, “On this auspicious festival of lights, may the glow of joy, prosperity and happiness illuminate your life and your home.”

The History of Diwali:

It is believed that the roots of Diwali can be traced back to ancient times when communities celebrated a festival that took place after the annual summer harvest. Diwali is mentioned in some of the oldest Hindu scriptures, such as the Puranas, and is considered to be one of the most important festivals to take place in India each year. Today, depending upon the geographical region, various denominations of Hindus celebrate Diwali with different ritualistic practices and center their worship around different deities. The deity that is most commonly paid homage to during Diwali festivities is the goddess of wealth and prosperity, Lakshmi.

It is believed that Diwali is Lakshmi’s birthday and that she roams the earth on this day. For this reason, Hindus light candles outside of their homes and open their doors and windows to invite her in.

The fables and stories told for Diwali similarly vary regionally, however, all of them emphasis the importance of internal exploration, the light of goodness that is found within each of us, and the victory of good over evil. The most prevalent Diwali story centers around Lord Rama, who was the son of the King of Ayodhya and is the main character in the great Hindu epic Ramayana. It is said that after being wrongly sent into exile to live amongst demons for 14 years, that Rama, his wife Sita, and brother Lakshmana defeated the all powerful demon god Ravana and retuned victoriously. Upon their arrival, the people of Ayodhya placed oil lamps outside of their homes as a way to light their path. Once they did return, Rama was proclaimed as King.

The Significance of Diwali: For Hindus of all denominations, Diwali serves as an important reminder to honor the goodness that is found within. By committing one’s self to spiritual practice and focusing on the light inside of our hearts, Hindus believe that we can move closer towards the one divine reality. Diwali also reminds us to act upon the karmic truths of knowledge over ignorance, compassion over hate, and goodness over evil.

To exemplify the importance of Diwali in greater detail, we can look at a speech that Mahatma Gandhi gave on Diwali in 1947. After discussing the previously mentioned battle between Rama and Ravana, the immortal Indian leader told the audience:

Only those who have Rama within can celebrate this victory. For God alone can illumine our souls and only that light is real light. The bhajan [song] that was sung today emphasizes the poet’s desire to see God. Crowds of people go to see artificial illumination but what we need today is the light of love in our hearts. We must kindle the light of love within.”

Although Diwali is only a single day each year, Hindus prepare, partake in rituals, and celebrate the holiday for almost a full week. In total, five days make up the larger festival, including two days before Diwali and two days after, which are distinguished by different traditions and customs. Still, however, what remains consistent throughout the entire five days is the celebration of goodness that is found within each of us:

Dhanteras (the first day): Diwali begin on Dhanteras, a day that is meant to set the mood for the remaining four days of the festival. It is believed that on this day, Lord Dhanwantari, an avatar of Vishnu, came out of the sea with the holistic healthcare system of Ayurveda for the betterment of mankind. Dhanteras is considered to be a highly auspicious day and many Hindus spend their time shopping for things like gold, silver, and precious stones. At nighttime, families will light earthen lamps outside their homes and children will play with firecrackers.

Narak Chaturdasi (the second day): It is believed that on Narak Chaturdasi, the second day of the Diwali festival, that Lord Krishna destroyed a powerful demon named Narakasur and freed the world from fear. On Narak Chaturdasi, Hindus stay inside their homes, spending their time cleaning and relaxing for the upcoming Diwali festival. It is thought that on this day individuals should massage their bodies with oil to relieve it of tension and tiredness. Many Hindus believe that diyas, the lamps that are commonly used on Diwali, should not be lit on this day.

Diwali (the third day): As we have previously mentioned, Diwali is dedicated to the worship of the goddess Lakshmi and is thought to be the day that Lord Rama returned from exile. In addition to Lakshmi, deities such as Ganesh and Kali are also popularly worshiped. On Diwali, Hindus light diyas in their homes, along streets, in parks, and other public places. Some of them even go the extra mile by making use of fairy lights and neon lighting (you could find similar ones on www.neonfilter.com) all across the home and streets. India literally becomes lit up as families perform worship rituals, enjoy sweets, and visit temples. At nighttime, children play with firecrackers as fireworks light up the sky. Diwali also marks the day that businessmen inaugurate new accounting books for the following year.

Govardhan Puja (the fourth day): Depending upon the geographical region, Govardhan Puja will be celebrated differently. In the Western states of India, for example, this day is believed to be the New Year and is celebrated as such. In the northern states, however, Hindus consider it to be a day of important worship. On Govardhan Puja, which is believed to be the day that Lord Krishna saved the people of Gokul from the wrath of Indra, typical Hindu families will wear new clothes, exchange gifts with friends, and go to temples where deities are ritualistically bathed.

Bhai Dhooj (the fifth day): The last day of Diwali festivals, Bhaj Dhooj, holds great significance for brothers and sisters across India. It is believed that on this day, Lord Yama visited his sister Yami after spending a great deal of time away from one another. The visit went so well that Yama declared if any brother greets his sister on this day, they will be blessed with a life of longevity. On Bhai Dhooj, sisters and brothers share each others company and enjoy special dishes which are followed by sweets.

In addition to diyas, firecrackers, and fireworks, other traditions, such as storytelling, are enjoyed throughout the Diwali festivals. One unusual custom is that Hindus traditionally gamble on Diwali, as the goddess Parvati is believed to have said that anyone who gambles on Diwali night would enjoy prosperity throughout the following year.

A Day that is Celebrated by Many:

While Diwali is most commonly known as being a Hindu holiday, a number of other religions, albeit for different reasons, similarly cherish and celebrate this day. Jains, for example, believe that Diwali is the day that moksha was attained by the great teaching God Mahavira, Sikhs celebrate the day of Bandi Chhor Divas, which was the day that Guru Hargobind was released from a Grwalior prison, and Newar Buddhists celebrate the Diwali by worshiping Lakshmi. Diwali at the Sikhs’ holiest site, the Golden Temple.

If you are interested in partaking in the Festival of Lights this year, you may want to search and connect with Hindus in your community. If you don’t think this is possible, you can take the time to light a candle and reflect on the divine light that is universally found within.

Thanks for This Awesome Article about Diwali. For diwali quotes visit diwaligreetings.co.in

I was more than happy to uncover this great site. I need to to thank you for your time due to this fantastic read!! I definitely enjoyed every bit of it and I have you bookmarked to see new information on your blog.