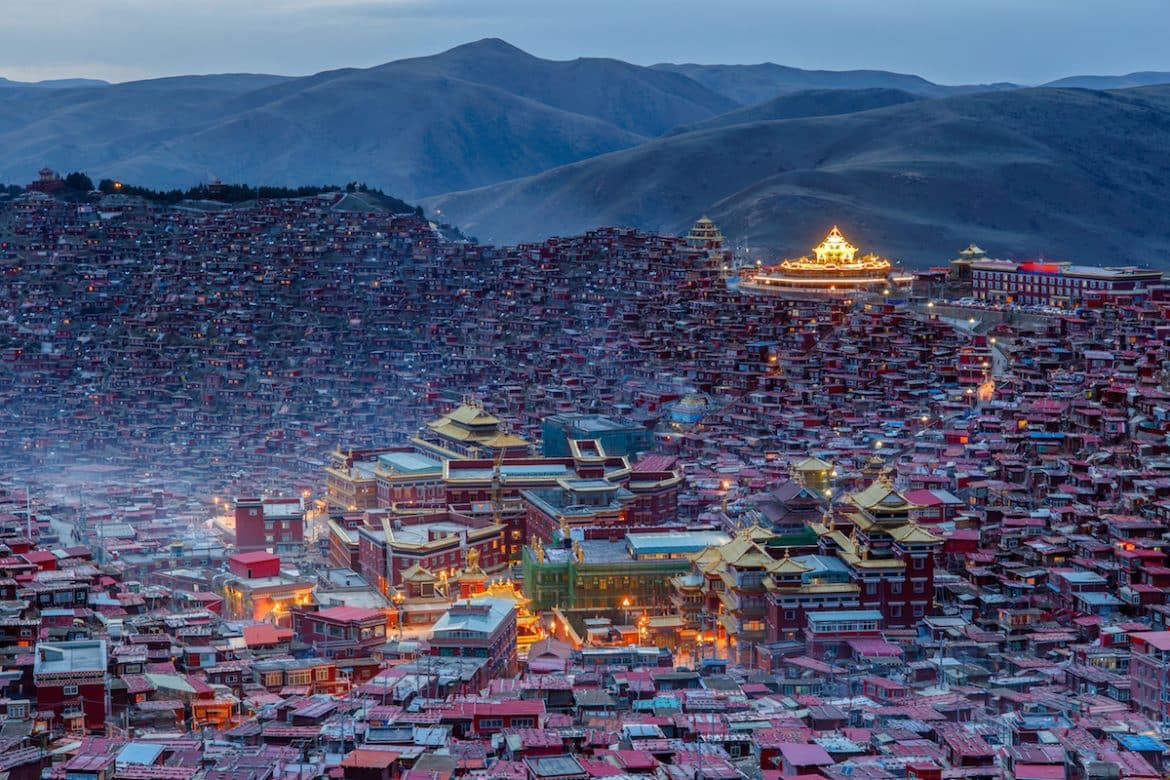 Over the past two months, Chinese construction crews have continued demolishing parts of the celebrated Larung Gar Buddhist Academy in the autonomous region of Tibet. Earlier this year, Chinese officials announced that the monastery was in need of ‘ideological guidance’ and that half of the 10,000 monastics staying at Larung Gar would have to find new residence by October 1st, 2017.

Since construction began on July 20th, three of the Monastery’s practicing nuns have committed suicide in protest of the demolition and nearly 70-year Chinese occupation of Tibet. In the eyes of Tibetans around the globe, destroying one of the country’s most recognizable religious institutions is another clear example that shows how China ultimately wants to destroy Tibetan culture completely.

It was in 1950 when Chinese military forces first made their presence known in Tibet. Although the small neighboring nation had never been formally recognized as an independent state, the people of Tibet were using their own currency, flying their own flag, and had singed numerous international treaties at the time of the invasion. The Chinese military, which had just won a 23-year-old civil war, entered into a peaceful nation where people prioritized deeply rooted spiritual interests over governmental affairs.

Over the next nine years, the Chinese presence continued to grow and their military began using violence against displeased Tibetans. It wasn’t until March 10th, 1959, when the Tibetans revolted against Chinese oppression in the capitol city of Lhasa. What is now referred to as the Tibetan Uprising lasted 11 days before the Chinese military thwarted the revolution attempt. It was during these trying days when the 14th Dalai Lama was forced to escape into exile by traveling over the Himalayan Mountains into India. Since the uprising, hundreds of thousands of Tibetans have taken the same route to Dharmsala, India, to join their unquestioned leader.

China and Tibet offer strikingly different viewpoints about the ownership rights of the contested region. Chinese leadership claims that Tibet has laid within China’s borders for over 800 years, while Tibetan leadership claims that China unethically entered into the country and used brute force to take over Lhasa and other populated cities. Chinese officials also claim that they liberated the Tibetan people from the governance of the Dalai Lama, a leader who the Chinese believe is hiding a political agenda underneath his monk robes. Tibetans point out that China refuses to acknowledge the fact that Tibet had their own currency, flew their own flag, and had signed numerous international treaties at the time of the initial invasion. A number of other relevant third party sources believe that the continuous Chinese occupation largely stems from the fact that the geographical region of Tibet is one of the most naturally rich places in the world.

Since the initial invasion, it is believed that over 1 million Tibetans have died at the hands of the Chinese military and millions more have been forced into exile. There are countless stories that expose the violence, starvation, and torture that has been shown towards Tibetans for nearly 70 years. Still today, the Tibetan people living in the autonomous region of Tibet are unable to openly practice their religion, show reverenced towards the Dalai Lama, or celebrate their own unique culture. Many believe that China’s ultimate goal is to completely disseminate the Tibetan way-of-life.

It was in 1980 when the revered Tibetan Buddhist Lama Khenpo Jigme Phuntsok founded the Larung Gar Buddhist Academy in a remote part of occupied Tibet. Jigme Phuntsok was determined to combat China’s decade long endeavor to ‘reeducate’ Tibetans in hopes of shifting their collective beliefs about Chinese governance in the region. After opening in 1980, Larung Gar quickly became one of the most important institutions for teaching Tibetan Buddhism and carrying on Tibet’s cultural traditions. Thanks to the work of Jigme Phuntsok and other recognizable Tibetan monks, the number of Larung Gar’s practicing monks and nuns grew rapidly and it is now estimated that there are 10,000 practicing monastics in the vibrant hillside town. Larung Gar Buddhist Academy, which is neatly situated 4,000 meters above sea-level in the Himalayan Mountains, is believed to be home to the largest religious monastic order in the world.

According to China’s geographical borders, Larung Gar resides within the province of Sichuan and is 15 kilometers away from the city of Sertar. In early June, Chinese officials released a Serta County Order that outlines plans for demolishing large parts of Larung Gar. According to the court document, China’s objectives for the construction are to provide ideological guidance, promote the law, reduce the number of monastic residents from 10,000 to 5,000, demolish monastic residences, and build a camera surveillance system. After receiving international backlash for the order, Chinese officials revamped their reasoning for the construction and said that the work was aimed at making Larung Gar more beautiful, orderly, and peaceful. They also said, paradoxically, that the work was being done to diminish safety concerns stemming from overpopulation even though many of their major cities are known to have major population issues.

Since construction began in late July, Chinese officials have worked diligently to block both individuals and the media from reporting on the ongoing demolition. To limit the amount of international attention that the demolition receives, the Chinese government has meticulously monitored social media activity, closely watched phone interactions, and banned anyone from coming close to the construction zones. Unfortunately, Tibetan news outlets recently reported that at least three practicing Tibetan nuns have committed suicide in protest of the demolition, while a fourth nun, attempting to do the same, was stopped by her peers.

Even though numerous countries, human rights groups, and international activist organizations have publicly condoned the demolition, Chinese officials have remained adamant about their positive intentions and have refused to stop the construction work.

If you are interested in continuing to monitor the situation at Larung Gar, there are a number of useful outlets where you can obtain up-to-date news. Two websites in particular that we believe are worth visiting are Free Tibet and Radio Free Asia. Furthermore, if you would like to have your voice heard about the injustices of the Tibet China conflict, we recommend signing a change.org digital petition aimed at stopping the construction or personally writing to Chinese governmental officials.

The Sacred Cities of India

[…] Tibetan culture continue till this day. Starting in July, 2016, Chinese construction crews began demolishing parts of the cherished Larung Gar Buddhist Academy in the autonomous region of Tibet, with […]