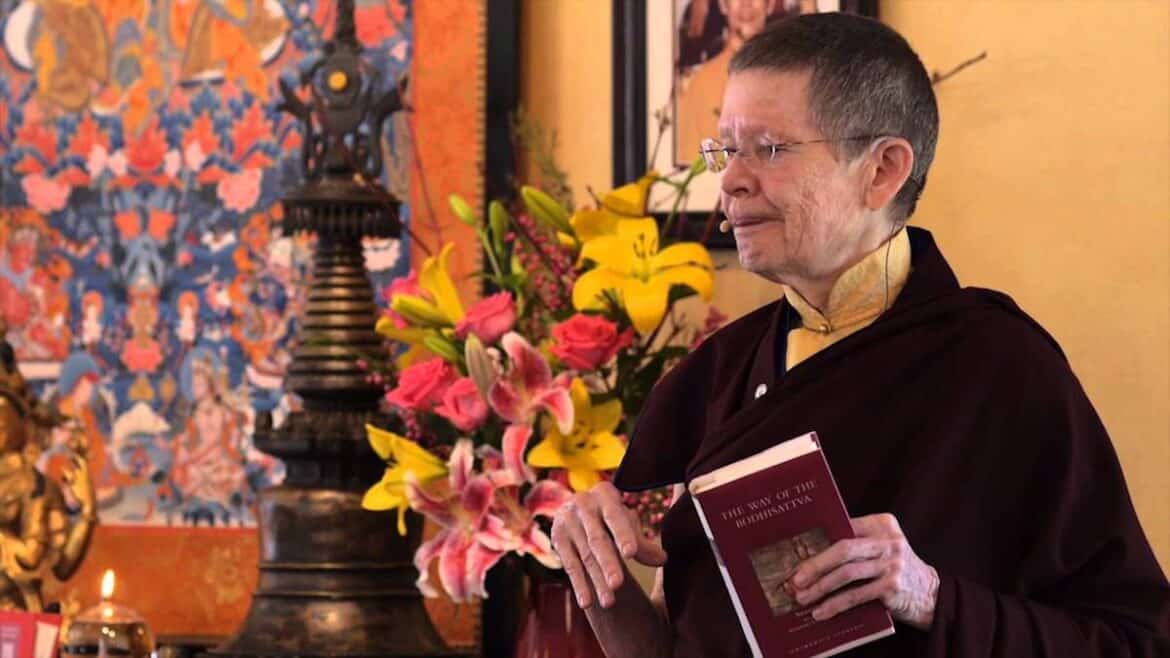 Pema Chodron’s path to becoming a globally celebrated Buddhist nun was filled with challenges and heartbreak. In her early years of life, Chodron went through two devastating divorces that caused her to search for spiritual and therapeutic treatment strategies in hopes of healing her pain. It was during this time that she found Buddhism, and soon she became absorbed in the spiritual teachings found within the religion. Today, Pema Chodron is regarded as the most influential American to ever be ordained as a Tibetan Buddhist nun and she continues to inspire millions with her best-selling books and words of compassion.

The Life of Pema Chodron:

In July of 1936 a Catholic family from New York gave birth to a young girl whom they named Deirdre Blomfield-Brown. While the young girl’s childhood was typical for someone born into similar circumstances, her adult life would go in a direction much different than those of comparable upbringing and class. For Deirdre Blomfield-Brown, now commonly known as Pema Chodron, a number of disheartening life events would move her down a path untravelled by any American woman before.

Like many young women of her generation, Pema Chodron married young and had two children in her early 20s. This marriage, however, wasn’t meant to be and Chordron and her first husband decided to get divorced. After her first marriage ended, Chodron, still hoping to live a conventional American life, remarried, moved to the west coast, and began studying at the University of California-Berkley.

Sometime after graduating with a Bachelors degree in English Literature and a Masters degree in Elementary Education, Chodron received the devastating news that her second husband wanted a divorce. This, being her second disheartening failed marriage, caused her to explore various spiritual and therapeutic treatment strategies in hopes of healing her immense emotional pain. It was during this period of searching when Chodron discovered Buddhism and the meditation techniques taught by the Buddha himself. She was so intrigued by the practice of meditation, and the messages presented in Buddhism, that she decided to leave her life in America to study under Lama Chime Rinpoche, a prominent Buddhist teacher, in London.

After an extended period of time in England and a growing sense of spiritual self-worth, Chodron returned to the United States to continue her studies in San Fransisco under Chogyam Trungpa Rinpoche. As her knowledge and understanding of Buddhism and meditation increased, Chodron began taking her practice more seriously and eventually decided to commit herself to celibacy for the remainder of her life. She decided that the most important relationship in her life was going to be her relationship with herself.

It was in 1974, at the age of 38, when Pema Chodron was ordained a novice Buddhist nun. At the time, full ordination for women wasn’t permitted, but Chodron eventually found a high-ranking Buddhist Lama, who was so impressed by her dedication, that he oversaw the full ordination process and helped her become the first American women in the Vajrayana Buddhist tradition to be bestow the honor of becoming a fully-ordained Tibetan Buddhist nun.

After ascending to a spiritual role unparalleled by any American woman before, Chodron and her former teacher Trungpa Rinpoche established the first North American Buddhist Monastery that could accommodate both women and men. The Gampo Abbey is located in Nova Scotia, Canada, and was opened in 1985. Today, Chodron remains the director of the Abbey and continues to inspire millions with her story of personal transformation and her words of loving-kindness and compassion. While Pema Chodron’s life didn’t exactly happen as she had once hoped, she will forever be grateful for the unfortunate life experiences that she had. She now fully understands how negative circumstances oftentimes lead to unexpected spiritual growth. Not only does Chodron remain the senior teacher at the Gampo Abbey, she is a prolific author who has gained almost celebrity status. Being a regularly featured guest on the Oprah Winfrey Network has allowed Chodron to spread her teachings of hope, compassion, and self-transformation. In total, she has published over 20 books including spiritual best-sellers such as: The Places That Scare You: A Guide to Fearlessness in Difficult Times, Taking the Leap: Fearing Ourselves from Old Habits and Fears, and When Things Fall Apart: Heart Advice for Difficult Times.

3 of Her Most Important Teachings:

After facing a number of disheartening events in the younger years of her life, Pema Chodron dedicated herself to understanding the reasons why so many of us struggle find happiness and discovering ways we could move ourselves to higher levels of subjective well-being. While her teachings certainly aren’t limited to these three, they are unquestionably some of her most important:

You are the Sky, Everything Else is Weather:

One of Pema Chodron’s most important teachings revolves around the fact that while our bodies, cognitions, emotions, and internal dialogue patters are continuously changing, depending upon our situation and circumstances, there is a part of ourselves that remains vibrant and wholly unchanged. She is famously quoted as saying, “You are the sky. Everything else – it’s just the weather.” After suffering through the painstaking reality of two devastating divorces, at a very young age, Chodron’s exploration into Buddhism and meditation helped her distinguish her truest nature of pure-consciousness from the thoughts and emotional reaction of her ego. The celebrated Buddhist nun tells us that by taking the time to get in touch with the deepest parts of ourselves, by practicing meditation, we too can come to realize who we are at the deepest level of our beings.

We Fear not Being Good Enough:

If humans start examining the fears in their lives that cause much of their suffering, they will realize that they are most scared of searching within and accepting whatever it is they find. At the surface level, one may assume they fear the rejection of another or the circumstances they face, but at a deeper level, they are freighted by the notion that they may not being good enough or even lovable. After her second failed marriage, Chodron realized this truth when she starting exploring her core beliefs in intensive Buddhist training. She tells us that by taking a warrior’s mindset and exploring the depths of one’s being, we can overcome our fears by offering ourselves love and compassion. Here is a short video of Chodron talking about what humans fear at the deepest level:

The Happiness We Seek is Always Available:

Pema Chodron’s life experiences taught her an invaluable lesson that remain disregarded by the vast majority of westerners. In her early life, Chodron’s search for happiness was based on other people and external circumstances, yet after her two devastating divorces, she realized that one’s feelings of joy can never be dependent upon these things. The feelings of true fulfillment that each of us seeks are only available within ourselves. Additionally, Chodron tells us that happiness can only be found in the present moment. She tells us, “The most complete and true happiness comes in moments when you feel right there, completely present, with no ideas about good and bad, right and wrong – just a sense of open heart and open mind.”

[…] that you had 5 years ago doesn’t suit your current situation today. Tibetan Buddhist nun Pema Chodron sums it up best when she says, “You are the sky. Everything else is just the weather.” The part […]

[…] that you had 5 years ago doesn’t suit your current situation today. Tibetan Buddhist nun Pema Chodron sums it up best when she says, “You are the sky. Everything else is just the weather.” The part […]

[…] them is the most innate part of our being and it is in fact our true self. Celebrated Buddhist nun Pema Chodron speaks about this truth when she tells […]