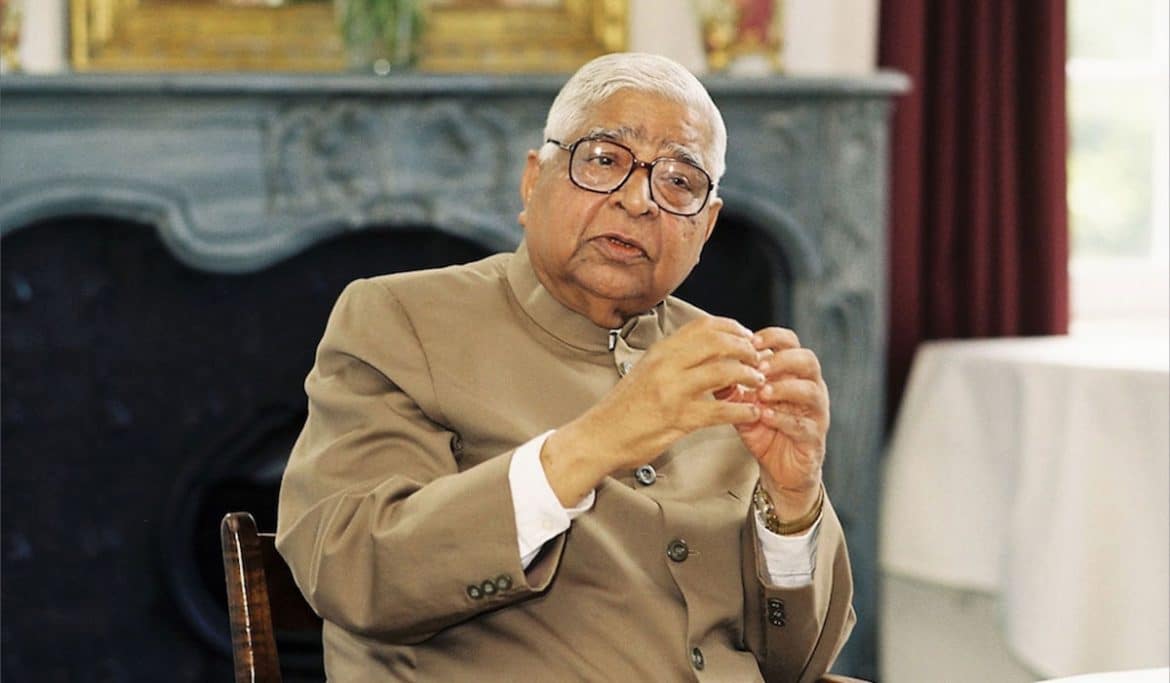 In comparison to the iconic Vipassana Meditation teacher S.N. Goenka, there may not be a single individual who’s done more to spread the Buddha’s secular teachings to the western world. After opening his first Vipassana retreat center in 1976, Goenka methodically built a worldwide organization that offers meditation courses free-of-charge in over 90 countries today. Throughout his lifetime, he additionally taught Vipassana to tens of thousands of individuals while training over 1,000 more to become meditation instructions. It is for these contributions, and others, that S.N. Goenka has been described as ‘The Man Who Taught The World To Meditate’.

The Life Of S.N. Goenka:

It was on January 30th, 1924, when a wealthy Indian family living in Mandalay, Burma (modern-day Myanmar) gave birth to a boy who’d go on to change the world in the most unexpected of ways. At the time, the devoutly religious Goenka parents, who took great pride in instilling Hindu values in their children, would’ve certainly laughed at the notion of their son Satya Narayan, now known simply as S.N., becoming one of the most iconic Buddhist meditation teachers to ever walk the earth. Even for S.N., who dreamed of becoming an eminent businessman like his father, this idea would’ve been consider absurd for nearly half of his life. Yet as fate would have it, this is exactly how things would play out.

After living his childhood years in great comfort and prosperity, S.N. Goenka went to work for his family’s business in 1940, at just-16 years-old, with lofty aspirations of creating a lavish lifestyle built upon legendary levels of professional success. By the time he was 31, Goenka would seemingly be well on his was as he’d already risen to become one of Burma’s most distinguished businessmen. While his external success, which was easily recognized by the positions he held at some of the most important business organizations in Burma, was enviable to outsiders, Goenka himself struggled to deal with his ballooning ego and fits of rage. Reflecting on this time period in a 2010 interview, Goenka recalled:

At a very young age, I became a successful businessman. In Burma, I became president of the chamber of commerce. I became egotistic. I would beat my children mercilessly. I had always topped my class in school. If my children got bad marks, I would beat them.”

In addition to these bothersome feelings of egotistical pride and unsympathetic anger, S.N. Goenka’s relentless drive to improve his professional status was taking a toll on his physical health. The stress of his self-absorbed lifestyle was so bad, in fact, that the migraine headaches he’d dealt with for much of his adult life progressed to the point where he was unable to work at optimal levels. Moreover, although his substantial wealth afforded him the opportunity to consult with numerous world-class doctors, his persisting headaches lead to a dependency on medication and a deeper dissatisfaction with life. It was at this point, when he was desperate for a solution, when Goenka sought out the Burmese Vipassana Meditation teacher Sayagya U Ba Khin upon hearing that the practice may offer him relief. Although Ba Khin would eventually take Goenka under his tutelage, both men initially had reservations about working with one another. While the devoutly Hindu Goenka, who’s primary concern was finding relieve from his migraines, was hesitant about undertaking a Buddhist practice and resistant to committing himself to the grueling 10-day meditation retreat that new students were required to take, the highly passionate Ba Khin didn’t think the egotistical businessman had the right motives for practicing the meditation technique he’d come to cherish. It is said that Goenka, using his status as leverage, tried to make an alternative arrangement with Ba Khin to learn the practice, but the meditator master wouldn’t budge. Finally in 1956, at the age of 32, S.N. Goenka gave into Sayagya U Ba Khin’s stipulations and begrudgingly took his first ten day Vipassana Meditation course. Of the experience, Goenka recalled:

In 10 days, the migraine I had for 20 years was gone. I did not need the morphine I had been taking for 10 years anymore. But the big achievement was that my anger was gone, and my ego became less.”

Over the course of the next 14 years, S.N. Goenka’s interest in his business ventures dwindled and his fascination with the Buddhist practice continued to grow as he spent more and more time studying under Ba Khin. Then, in 1969, Sayagya U Ba Khin appointed him as a full-time Vipassana Meditation teacher and encouraged him to return to his native country of India to revive the technique that was developed there by the Buddha some 2,500 years ago. While it’s easy to see how S.N. Goenka enjoyed great success as both a businessman and meditation teacher, the impact he made in his latter career couldn’t be seen in dollars and cents but rather in the number of lives he positively affected. For example, it was in 1976 when the now immortalized meditation teacher opened his first Vipassana Meditation center in the outskirts of Mumbai and now there are over 120 organizational centers worldwide which all offer retreats free-of-charge. Furthermore, Goenka personally taught tens of thousands of individuals the art of Vipassana Meditation and trained over 1,000 assistant teachers to help spread the ancient technique. Today, there are meditation retreats held at 227 locations in 94 countries all of which is made possible with the donations of adoring meditators.

Despite the fact that S.N. Goenka passed away in 2013, it is clear that his legacy will forever transcend generations.  In addition to writing or contributed to numerous books such as The Art of Living: Vipassana Meditation as Taught by S.N. Goenka, Meditation Now: Inner Peace through Inner Wisdom and The Art of Dying, Goenka also fulfilled one of his teacher’s primary wishes by building a Vipassana Meditation monument in India that pays homage to Siddhartha Gautama, the Buddha, for developing and teaching the technique. The stunning Global Vipassana Pagoda, which was designed in a Burmese architectural style out of gratitude to the country that preserved the technique, opened its doors in 2009 and is home to a meditation hall that can sit upwards of 10,000 people. Moreover, due to the numerous contributions he selflessly gave to the world, S.N. Goenka has been honored with numerous awards such as the highly distinguishable Padma Award, India’s highest civilian honor, and also was offered the opportunity to be a keynote speaker at the U.N.’s Millennium World Peace Summit in 2000.

When considering the fact that numerous celebrated spiritual teachers in the United States such as Joseph Goldstein, Sharon Salzberg, Daniel Goleman and Jack Kornfield acknowledge S.N. Goenka as being one of their primary figures of inspiration, it becomes clear to see why there may not be a single individual who played a more influential role in bringing Buddhist meditative practices to the western world. While Goenka’s supreme wisdom extends far beyond human suffering, Vipassana Meditation, awareness and equanimity, these topics are unquestionably some of his most important teachings:

The Underlying Cause Of Human Suffering: When S.N. Goenka was teaching Vipassana Meditation, he went to great lengths to illuminate the underlying causes of human suffering and told us that it’s only by intimately knowing these reasons will we be able to free ourselves from the bondage that comes as a natural byproduct of being alive. While it’s easy to assume that our hardships are caused by people, circumstances and things outside of ourselves, S.N. Goenka told us that we must look beyond these naive assumptions and examine the psychical sensations we feel on our body.

In fact, Goenka believed the primary reason individuals suffer is because they develop conditioned attachments towards particular bodily sensations they experience numerous times. “One fleeting reaction of liking or disliking may not be very strong and may not give much result, but it can have a cumulative effect. The reaction is repeated moment after moment, intensifying with each repetition, and developing into craving and aversion,” he told us. When you factor in an individual’s ignorance towards both their true nature, which is beyond the ego, and the impermanent nature of reality, it becomes clear to see why our continuous struggle to live with nothing but positive experiences and feelings inevitably leaves us dissatisfied with life.

Taking The Path Of Vipassana Towards Liberation:

For anyone who has ever taken the highly acclaimed 10-day Vipassana Meditation course taught in the lineage of S.N. Goenka, where they had the opportunity to watch and listen to the iconic meditation teacher in hours of video and audio lessons that were recorded before his death, it becomes clear to see how deeply passionate he was about the ancient technique which instructs meditators to consciously observe physical sensations throughout their bodies.

By utilizing the technique which is believed to have been taught by the Buddha himself, Goenka tells us, we can break free from our conditioned cravings for and aversions towards particular body sensations while moving closer towards spiritual liberation. Instead of explaining the intricacies of the practice here, let’s listen to Goenka himself describe Vipassana in this short video:

Developing The Wings Of Wisdom:

S.N. Goenka tells us that in order to attain the ultimate goal of Nirvana, we’ll have to develop the wings of wisdom by fully committing ourselves to the practice of Vipassana. That is, we’ll have to develop the wings of awareness and equanimity which lead to the spiritual liberation we most deeply desire. “The bird of wisdom needs two wings to fly. They are awareness and equanimity,” Goenka says.

As an individual learns Vipassana, they are not only instructed to observe their sensations but also to develop equanimity towards each and every feeling regardless of how pleasant or unpleasant they may be. This is because it’s only by developing awareness and indifference towards our sensations in practice will we be able to break free from our conditioned attachments in the real world. The iconic teachers tells us, “When practiced together they lead to liberation from suffering.”

“For real happiness, for real lasting stable happiness, one has to make a journey deep within oneself and see that one gets rid of all the unhappiness and misery stored in the deeper levels of the mind.”

“The consequences of today are determined by the actions of the past. To change your future, alter your decisions today.”

Diwali: The Hindu Festival of Lights